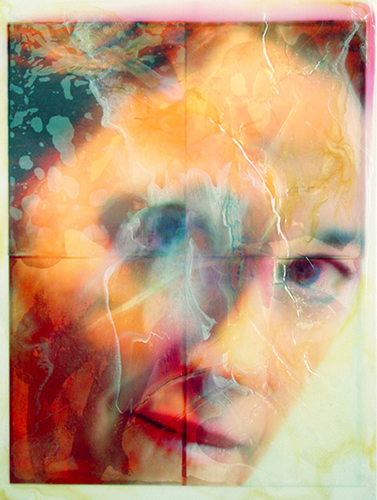 Visage and Expression is comprised of a series of portraits that Ray DiCecco refers to as his  photo-paintings. Being an electronic medium, digital photography erases the artist’s hand on the surface of the work of art. However, Ray DiCecco incorporates painting into each piece re-instating the maker into each work while demonstrating the emotional response to the sitter.

The facial topography of the individual acts as a cypher of identity but instead of acting as photographic document it becomes a dreamlike psychological map of characteristics. DiCecco uses digital photography on transparent film or print papers, mounting them on can vas after which he applies multiple layers of polymer media on top creating a layered transparency achieving effects somewhat like those seen in fun-house mirrors. The sitter’s facial characteristics fluctuate in size, movement, blur, re-appear, fade again, and then return to life.  Lane 2, 2011 is a good example of this fading in and out of reality seen in the photographic portrait. Like dream or memory the sitter’s characteristics recede and converge as one studies them through the film of layers that reveal and hide their features creating ambiguities, and shifts in the visages.

In DiCecco’s words “the medium is a sort of clear barrier but one that serves a dual purpose; to permit a look at the subject exposing her vulnerabilities and simultaneously act as a protective layer making her impervious. “ These images are created out of four pieces that come together as one portrait yet somehow shift and disjoin, to produce the effect of wrinkled cellophane paper atop a photograph. In this respect his portraits are Baudrillard-ian fragments that are real and can be fragmented because DiCecco has first given them meaning.

DiCecco also employs double exposure as seen in Casey 4, 2011, for its ability to portray the dichotomies inherent in human personality. The artist synthesizes these concepts to present us not only with the contrasts within any given personality but also as a way of chronicling diversity. DiCecco is painting with light, his foci are dramatic, and when he includes backgrounds, they are well synthesized and harmonized, refraining from any type of distraction. In considering all these formal characteristics; negative/positive space, angle, view, line, and focus, he makes photography a fine art.