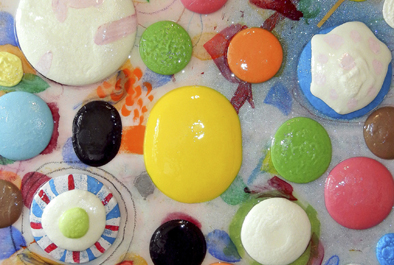 Javier Infantes understands creativity as a language of experimentation, as a method of investigation and as an acquisition of knowledge. He is interested in traveling into our inner selves, towards discovering what we are: thought, emotion, feeling, and memory.

"Perhaps we are what we remember...the recollections make us who we are," he says.

The works presented in this exhibition are images that, from his personal point of view, "talk" about the landscape and architecture of human wishes and dreams. He likes for his works to get into all those places where our emotions and feelings are built and experienced and also where our memories are stored. Works that attempt to approximate the vast internal rich textures of which our recollections and longings are made. Resin in his paintings plays the role of storage. It is a metaphor for the transparent container that holds recollections and memories sometimes symbolized by rounded pieces of foam. Colors, shapes, and textures represent our emotions, feelings and memories that find themselves floating freely on the viscosity of the resin that finally manages to trap them and keep them intact and unchangeable forever.

Javier Infantes was born in Estepona, Spain. He has been living in NYC since 2007. He studied painting, graphic design, photography and drawing in Spain and the US. He worked as an art teacher and interior decorative painter in Spain. His work has been published in various Spanish media including ABC Newspaper and Claves de Razon Practica, El Viejo Topo and Extramuros. He illustrated texts of Noam Chomsky, Stephan Jay Gould and the former Spanish Prime Minister Jose Luis Rodfiguez Zapatero among other illustrious public figures. Infantes has exhibitions in galleries and art fairs both in the United States and international locations. He has receltly participated in a group exhibition on the Upper East Side at the prestigious Waterfall Mansion in New York sharing the space with works of Warhol, Murakami, Nam June Paik and Robert Indiana among others. He also had some solo exhibitions at Stoa gallery and A&C Gallery in Spain.