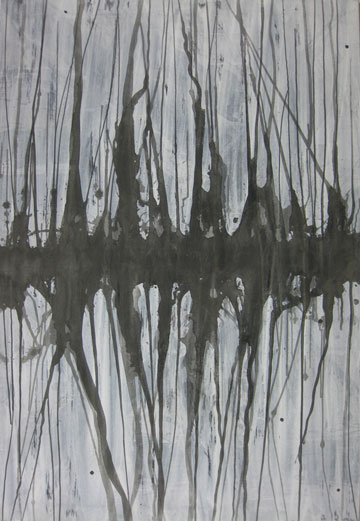 Otsuka's horticultural experience comes into play when painting in that he incorporates the mystifying qualities of nature into his work. This is most evident morphologically but also in the titles he uses for example Mizuumi which means body of water, or Mizoresleet. To Otsuka, "water provides nourishment through roots, and the intensity of the root energy is powerful." Otsuka aims to express this power through his paintings. The element of water is evident in the liquid surfaces of his works as is the energy with which he moves his brush. This unbridled beauty is expressed in an abstract idiom that is ineradicable in its impact. The word gesture in western art is usually associated with Abstract Expressionism popular in the late Forties and early Fifties. The Gutai group and its leader Jiro Yoshihara in 1954 were also working with gestural approaches of painting in Japan from where Otsuka immigrated. However, in ancient China according to the art theorist Xie He's (aesthetics shared by Japan) first canon of painting, a lively brushwork was considered to contain Qi yun or energy/spirit/breath of life. As explained by Sherman E. Lee in A History of Far Eastern Art, "the Qi yun, the life spirit, is the quality that differentiates genius from competence." (Fifth Edition, p.288)

Although abstraction in general speaks to the universal, Otsuka's abstract language becomes something very specific conveying the spiritual dynamism of his individual signature. Otsuka's abstract Bayou, 2011 contains sharp, strong line juxtaposed against soft evanescent passages of space like Sesshu Toyo's Long Landscape Scroll, (c.1420-1506) even though the latter is a representational work. Otsuka's works for this show are significant in size and site- specific to the Tenri which is a space of monumental scale. Thus, in this regard, it is conceptual because it alters the perception of the space rendering it awe-inspiring.