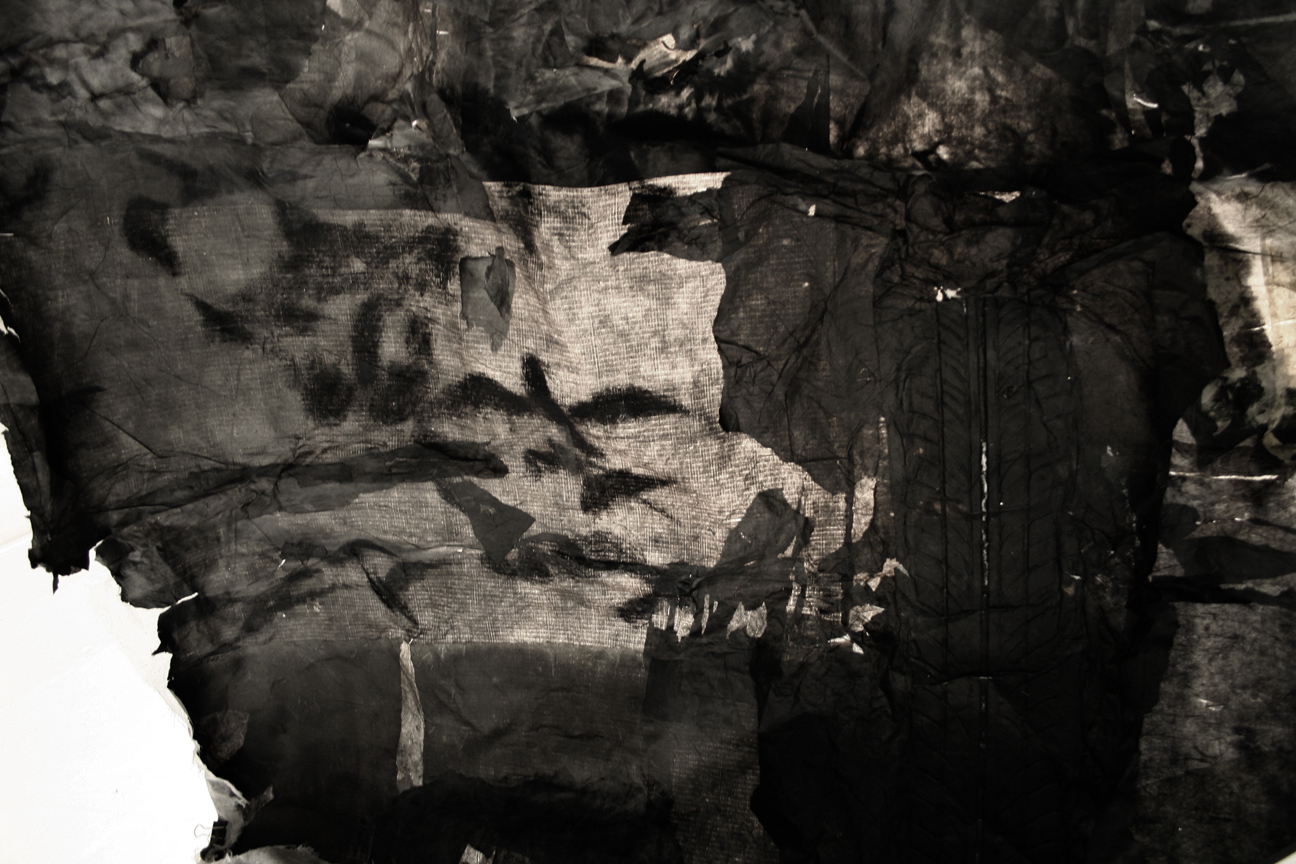 Lin's Dispelling the Clouds project has to do with the devastation wrought upon the environment by the rapid commercialization and industrialization after the opening up of China. There has been evidence of climatic changes along with the extinction of many species and ocean acidification as well as environmental degradation impacting its citizens' health affecting air quality, sick building syndrome, pesticide drifts, and electromagnetic radiation especially in Beijing. Air pollution is among the most important crises on an epic scale beyond measurable scales, and in Shanghai dead animals float in rivers that pollute the drinking water.

Lin's installation in the main gallery is comprised of ink drawing on a bird- like figure made of Xuan paper installed between the ceiling and top portion wall area. This figure is reminiscent of flight, in its ethereal, cloudlike appearance and is lit from beneath to seem like a soft cloudy day. in the front area of Tenri Lin has created a site specific piece that is also made of paper but that is simultaneously light and airy as it is imposing to the viewer in its curtain-like quality. Containing ink dashes and touches, its historic allusions are to calligraphy and traditional Chinese painting. Xuan paper also has a long history having been invented in China at approximately in 105 BC. Lin incorporates these historical elements into her post-modernist works that are made specifically for the environment and that cross the borders between fine arts and calligraphy. Rather than caving in like many others because of her mother country's problems, Lin chooses to offer hope with a light airy environment that although through its inky touches, references China's environmental devastation, also reflects a brighter future and a new life being nurtured.

Lin Yan (b. 1961, Beijing) based in Brooklyn, New York. Lin is from a third generation artist family to study abroad. Having graduated from the Central Academy of Fine Arts in Beijing (1984), she continued her studies at the L'Ecole National Superieur des Beaux Arts in Paris (1986). Moreover, she earned her M.A. from Bloomsburg University in Pennsylvania (1989). Lin has exhibited internationally at such prestigious venues as The Museum of the Chinese in America (New York), The National Art Museum in China (Beijing), Shanghai MOCA and the Dresden State Art Collection in Germany. Her recent shows include: Lin Yan - Embracing Stillness, Prow Art Space, Flatiron Building, New York (2013) and New York Beijing, Here There, Yuan Art Museum, Beijing (2013).Her works have been included in the public art collections of the National Art Museum of China, Chengdu Contemporary Art Museum and Deutsche Bank, etc.