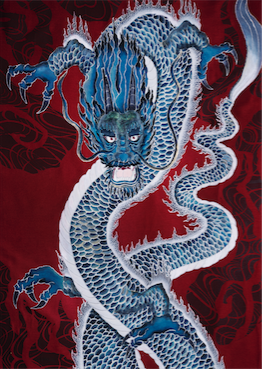 "Mugen" offers an opportunity to see textile arts by Chika MacDonald November 2nd  8th, 2016 Opening: Friday November 4th, 2016 from 6pm to 8pm Tenri Cultural Institute of New York is pleased to present an opportunity to display artworks by Chika MacDonald in the exhibition "Mugen," set to open on November 2nd, 2016. The Original Yuzen Design Technique was conceived in Japan in 17th century Kyoto by incorporating a stencil dyeing method with a thread gluing technique and the application with vivid colors. The most characteristic features of kimono ornamentation made in this way are the subtle color gradations and narrow, flowing light lines that outline the motifs.

Chika MacDonald was influenced by the Great East Japanese Earthquake and Tsunami of 2011. The only way she could sympathize with those affected was to send her daily prayers. One day while she was praying, an image of a dragon appeared on her mental canvas. She started to draw dragons and it has since become her mission to deliver those prayers through her creation.

Using Yuzen technique, MacDonald creates dragon designs in tapestries as well as traditional the Yuzen motif, flowers. Although it is very difficult to draw the mythical creature, MacDonald's dragon reflects her spirit and her prayer. "Dragon symbolize vitality and graciousness. I am using the dragon's qualities in my images to depict our journey into the future with hope," she said. Through her works, she expresses her source of strength and courage.

Chika MacDonald was born in Japan and works in the US. After she met Ms. Kiyoko Yamamoto, A Yuzen dye artist, at her New York exhibition, she started to learn Yuzen dye under Ms. Yamamoto. Currently she is devoting her creative energy in Yuzen production to familiarize people in US with the art of Yuzen dye. This is her first solo exhibition in New York.