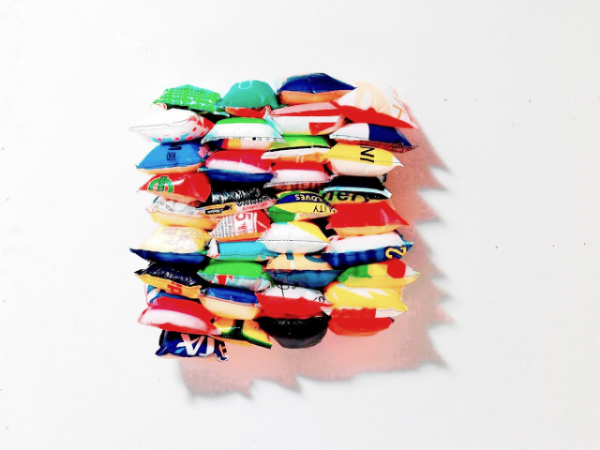 Hyemin Lee's pillow installations can be discussed in terms of their historical background in the Chosun Dynasty when seen as symbols of dividing men from women. Used to denote the palace quarters that women occupied while working on creative projects, Kyubang defined the female space. Lee's pillows however, are not just repetitions of past patterns, materials and forms but rather, they are new researches incorporating some traditional elements. In their categorical and hierarchic belief Confucianist doctrine instills in its followers a very strict code of ethics and hierarchical orientation. Thus, women needed to heed their roles as daughter in laws, be good in home management, be humble and chaste and have proper etiquette. These may seem like antediluvian ideas for today but revisionist studies like that of the Chinese American scholar Yuk Kwei Kwong posits a new more expanded perspective of Confucianism that shows Confucius as supporter to feminist ideas. By creating Kyubang pillows Lee speaks to these Chosun Dynasty Confucianist beliefs while respecting some, and changing others to suit her vision of contemporary art. She does not make them out of silk as did her forebears but rather out of repurposed materials that in themselves have a rich Korean history. Furthermore, Lee is reimagining the past into new forms. By sewing her works out of pieces of used Korean clothing she makes small pillows out of which she creates her installations. These configurations can take various forms like the frieze for example that usually wraps around the central part of a room. Although the frieze design is attributed to the ancient Greeks, by using it, Lee combines eastern and western compositional designs. As the artist says in her statement "I use daily objects representative of forgotten traditions or memories from my personal history, to create works, reviving in them the once lost dreams and hopes. I sew together old pieces of fabric and clothes, mostly traditional Korean garments that have been abandoned, to make miniature pillows, or collects wooden pieces from worn-out frames or cheap paper and cast them together into colorful sculptures. As I bring together everyday trivialities and traces of the past to restructure them in multiple layers into my own creations, I invite the audience to revisit and recollect their own past."