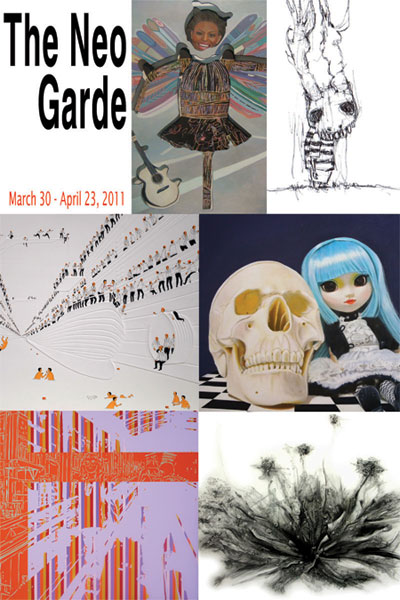 This show comprised of Ulsan University graduate artists represent freshness of vision and universal hope, but its members also explore future challenges. The title pivots off of the term Avant-Garde, appropriated by art from polemic strategy that used it to refer to a watch guard sent ahead of the troops to scout for the purpose of preventing ensuing attacks. An important leitmotif emerges when looking at the works in this show as a whole; critical content combined with a biting humor.

These artists were chosen out of a great number within the same school, because their work exhibited a sophistication rarely seen in artists this young.

Huikeun Yoon whose animation of a mouse traversing an artist’s studio and touches not only one’s funny bone but also garners the viewer’s sympathy.

Sungran Park’s favorite media are conte crayon on paper, for only with this type of material could she attain both the hardness of line and the softness of painting.

Yoosun Kim dreams of super-heroes.  Her mixed media works are created like cutouts that can be used to dress super-heroes or heroines.

Haein Choi appropriates the Northern Renaissance idea of Vanitas to examine notions of beauty by juxtaposing a ceramic doll with a human skull.

Hyukjae Kwon’s paintings engage the viewer’s eye through their interplay between two and three-dimensional depicted space.

Jieun Ku’s colorful landscapes are topsy-turvy for while the front plane’s elements are round the background, which usually has depth, is flat.

Kyoungje Jang’s wooden sculptures are haptic and reductive in that the subject is cut into the wood.

Daehyuk Yoon’s oil on canvas paintings intimidate by their content. We see a little girl with pigtails facing the classroom blackboard.